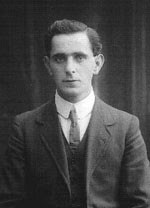 As we are now seven days away from the military parade which will take place in Dublin marking the 90th anniversary of the Easter Rising, I felt it would be a good idea to count down to that event by focusing each day on one of the seven signatories of the Proclamation of the Republic.

Today I will focus on Sean MacDiarmada, more commonly referred to as Seán MacDermott, who is one of the lesser known leaders of the Easter Rising.

Seán MacDiarmada was born in County Leitrim in 1884. He ran away from home when he was just 15 and ended up in Glasgow where he had an uncle. His uncle was a gardener and for a time Seán worked with him, but gave up gardening to become a conductor on the Glasgow trams. Here he worked for 12 months, and stayed altogether 2 years in Glasgow. He then returned to Ireland and went to Belfast, where he worked for a time as a tram conductor, and later as a barman. It was in Belfast in 1906 that MacDiarmada took the IRB oath, at a time when he was already a member of Arthur Griffith's Sinn Fein organisation.

His speech at the Sinn Féin annual convention in Dublin made a deep impression and he was described as a "striking handsome, and earnest, speaking with natural eloquence and with a sincerity which held his audience, gay and light-hearted with a gift of telling a humorous story and a tongue that was witty without being malicious."

MacDiarmada's association with Sinn Féin did not last long as he sought to spread the IRB throughout the country and in 1908 he transferred to Dublin where he developed a close friendship with veteran Fenian Tom Clarke. Shortly thereafter, MacDiarmada became stricken with polio and was forced to walk with a cane. He carried this cane with him into the GPO on Easter Monday, 1916.

Sean MacDiarmada fought in the GPO, where he was attached to the headquarters staff under James Connolly. It was Sean MacDiarmada that read Padraig Pearse's letter of surrender to those in the G.P.O.

After the Rising was put down by the British and the rebels taken captive, a sneering British officer remarked to MacDiarmada: "Do the Sinn Feiners take cripples in their army?"

MacDiarmada in fact almost escaped execution by blending in with the large body of prisoners but a British officer, Lee-Wilson, picked out the man with the stick and remarked to another officer that he was "the most dangerous man after Clarke."

Lee-Wilson was later killed during the Anglo-Irish war on the orders of one of MacDiarmada's closest friends - a man called Michael Collins.

Sean MacDiarmada was executed on May 12, 1916, the same day as James Connolly. They were the last two to face the firing squad.

Have you scorn for us who linger here behind you, Sean the wise?
As you look about and greet your comrades in the strange new dawn.
So one says, but saying, wrongs you, for doubt never dimmed your eyes,
And not death itself could make those lips of yours grow bitter, Sean.

As your stick goes tapping down the heavenly pavement, Sean, my friend,
That is not your way of thinking, generous, tender, wise and brave;
We, who knew and loved and trusted you, are trusted to the end,
And your hand even now grips mine as though there never were a grave.