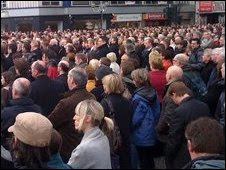 I haven't been about the blogosphere for a bit but I just wanted to express my revulsion at the events of the last couple of days which saw dissident republicans (I hate to call them that) murder two soldiers as well as a policeman.

The Real IRA and the Continuity IRA have claimed responsibility.

Let's be clear here, these people are not genuine republicans. They are a disgrace to the word. What do they hope to achieve exactly? Do they not realise the majority of people oppose them?

Anglo-Irish relations have never been better. While it's true in the past the people of this island did suffer at the hands of our British neighbours, those days are long gone. I'm dismayed and disgusted that people could commit these acts in 2009. They make no sense and have only served to destroy three families. Shame on those involved.

I wonder if they know that in the late eighteenth century, when the United Irishmen were addressing the issue of how Ireland and Britain should co-exist, it was stated that: "It is the union of mind which ought to bind these nations together."

What has been made clear of late is that there is a union of mind between our nations and it is a mind firmly against these kinds of atrocities. The problems of Anglo-Irish relations have tended to be when there hasn't been a union of mind and these so-called republicans are attempting to drag us back to those days. They wish to poison the mind. To turn communities against one another. To turn our nations against one another. I do not think they will succeed.

I hope anyone that knows information on the recent criminal activity comes forward and offers it to the police. Let's not go down the dark road of the past once again.