Making of a martyr 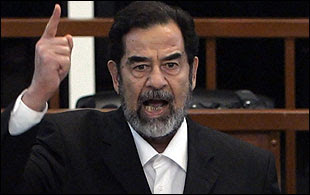 So Saddam Hussein has been found guilty of crimes against humanity - that's good.

Saddam has been sentenced to death by hanging - that's bad.

I don't see the sense in allowing this despicable human being to become a martyr.

Let him instead live out the rest of his miserable life in some rotten jail cell.

Iraq is in a bad enough way as it is and I feel his execution will do much more harm than good.

What a stupid decision.

What the Irish national anthem should be...
Today in History - Kevin Barry executed
'The flag of Islam should be flown over the Dáil'
The final horror
St Andrews through the looking glass
Let the aliens land. They might be here to pick me...
Words on Wednesday...with Joan Burton
In memory of Paul Hunter
The British - AND IRISH - Isles
Ireland humiliated by Cyprus