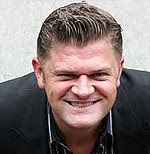 I know I decided to take a break from United Irelander for the month of August but I just had to interrupt my hiatus to express my disgust at the diabolical tripe that has been written in today's Sunday Independent by troglodytes such as Eoghan Harris and Brendan O'Connor (pictured left sporting his usual grin so cheesy you can almost smell the Gorgonzola).

O'Connor is famous for being a host on one of my most hated shows, You're a Sap Star. O'Connor went to number one here in Ireland with a single called 'Who's in the House' where he pranced around dressed as a priest shouting lyrics such as 'Who's in the House? Jesus in the house'. Apparently this wowed RTE bosses who felt it made him a natural choice as a talent show critic. It's sort of the equivalent of ITV show The X-Factor hiring Tinky Winky to be a judge alongside Simon Cowell based on that one time the Teletubbies got to number one in England. But I digress...

Today O'Connor has been repeating the usual neo-con mantras that have been doing the rounds and which have slowly but steadily been leading this planet on the road to ruin. O'Connor writes of the media and Islam:

"thanks to them, we know that this religion, whose fundamental principles will only be satisfied when its followers have wiped out Western civilisation, is not the problem this weekend; the problem is, in fact, the Jews and the only real democracy in the Middle East."

Uh, not quite Brendan. Judaism has nothing to do with it. The 'problem' was the wanton slaughter of innocent civilians. On a further note, O'Connor's remarks about Islam are, in my eyes, appalling and regrettable.

He wasn't done there though. O'Connor barks:

"It seems that some sections of the media would rather we risked another 9/11 rather than risk wrongfully locking up some mad Muslim fundamentalists."

I must say I'm puzzled by this attitude which suggests people were hostile to the measures taken during the week. From what I've been hearing the overwhelming majority of people were understanding and cooperative towards the safety measures taken across airports in Britain so what's with all this scaremongering? I'm also uneasy at the last part of that sentence by O'Connor which seems to be justifying internment. 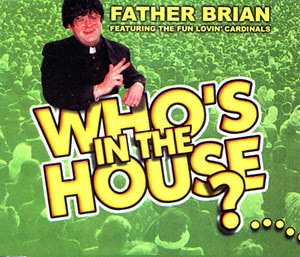 Are Muslims in your house?

As sorry as O'Connor's views are, they're not quite as deranged as the stark raving bonkers views of one Eoghan Harris whose column today reads like it was written by a guy who fell out of bed, hit his head hard on the floor only for a copy of the Koran to fall on top of him. Listen to this gem from Eoghan:

"I believe that ideological Islamism has no boundaries. As I have said before it is only a matter of time before Islamic terrorists use a tactical nuclear device in London or New York. Millions will die. And the mushroom clouds won't spare this sacred island."

Oh brother. It's the Cold War all over again apparently. Accept it isn't really. I've a feeling there's quite a lot of mushroom clouds floating around Eoghan Harris' house if you know what I mean...

Harris then came out with this unintentionally hilarious line:

"Most ordinary people I meet are terrified of Islamist terrorists."

Really Eoghan? One wonders what company Mr Harris keeps in his cloudy ivory tower. Most ordinary people I meet aren't terrified of Islamic terrorists. What they are concerned about is (a) our streets at night (b) our roads (c) the cost of housing (d) hangovers etc. Is Harris for real? He continues:

"So why the massive gap between what most Irish people believe - that Islam is the real problem - and what the Irish political class, led by Bertie Ahern, seems to believe - that Israel is the major problem?"

First of all, Ahern leads a political class? I must have missed that memo. Second of all, is there any evidence whatsoever that supports these incredible claims by Harris? I think not.

Harris goes on to blame anti-Semitic attitudes the same way O'Connor did - even though this isn't really the issue at all - and in effect becomes a bleeding heart Tory, a.k.a. a bloody eejit.


The views coming from some commentators on the Middle East crisis are unbelievably bad, bordering on demented.

Trolls like O'Connor and Harris would be better off putting their positions in the media to better use instead of filling our newspapers wih these far-fetched scare stories.

Who's in the house? I don't think anyone's home sadly.

I've decided to ease off on blogging while I enjoy the month of August which has only just arrived.

This site is first and foremost about Irish politics but nothing much is happening in this country right now as things are in a bit of a summer lull.

I figure there's no use being stuck here in front of a PC when there's still some sunshine left to enjoy.

I hope to return properly in a few weeks and maybe I'll bring back some of the old features which I've been ignoring lately.

Until then stay safe, keep well and enjoy yourselves.