Hello to those of you who have been popping into this place over the past few weeks and months. You will no doubt have noticed the severe lack of posts on United Irelander. I'm sad to report that my inactivity is down to some health issues I've been dealing with throughout much of the year. It's nothing too serious thank God but it is something that has caused me quite a lot of discomfort. As a result my time spent on the Internet, and thus this website, has been curtailed.

I also must apologise to Sinn Féin's Daithi McKay as I was supposed to publish an interview I did with him last month but circumstances meant I was unable to do so. I'll try and publish that either this week or the next. Sorry also to anyone who left me emails as I've not been around to check them.

Until I'm feeling 100 per cent healthy I've decided to give United Irelander a miss for the foreseeable future. A person's health is the most important thing and to be perfectly honest, writing about the absurdities of both Irish nationalism and unionism is something I don't need on my plate right now! I do hope to get back blogging soon and God willing that will be in a few short months.

So that's the situation, folks. Just thought I'd let the site's regulars know what the story is rather than leave you in limbo. I'll publish up that interview with Mr McKay soon and then put the site into a hiatus. Thank you for stopping by whatever religion, nationality or political affiliation you happen to have.

All the best and take care. 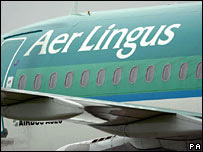 I see Aer Lingus pilots are set to strike over plans to pay colleagues based in the North less money than those in the Republic of Ireland.

Almost 500 pilots are to stage a strike next Tuesday and Wednesday.

The pilots' union said it would not allow Belfast based pilots to be treated as "second class citizens", according to Irish state broadcaster RTE.

I guess this dispels the oft-mentioned theory from unionists that in a united Ireland the south of Ireland wouldn't give a toss about the north!

Fair play to the pilots. I wish them well.